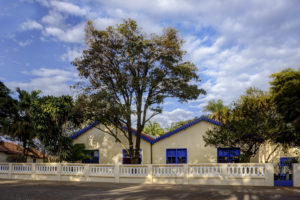 Candido Portinari’s former house, in Brodowski, the Casa de Portinari Museum, institution from the Secretariat of Culture from the State of São Paulo, represents the strong connection between the artist and his birthplace, origins and family ties. This is the spot where he conducted his experiments on mural paintings and went deep inside the technique over the years.

The complex is composed of a main house and annexes built successively. The typical simplicity of the countryside is the main characteristic of the museum which was inaugurated on 14th March, 1970.

Casa de Portinari Museum’s artistic collection is mainly composed of works done by the artist in mural paintings on the house walls in the fresco and tempera techniques. The theme is predominantly sacred, with the exception of the artist’s early experiences in this type of art. The collection also includes a set of drawings, an expressive and significant language in Candido Portinari’s production present in all moments of his career.

The museum also keeps the family’s personal-use objects, furniture and utensils and some rooms continue with their original functions, while others were adapted to be used as exhibition rooms. Inside the house, the atelier – with the artist’s work objects – and the “Capela da Nonna” (Nonna’s Chapel) – which Portinari painted to his grandmother who could not go to the church to watch the mass and pray, as she was sick – can be highlighted.

In May 2014, the Museum was reopened to the public after a complete and detailed restoration process, which lasted about two years. The works have reached the structural reinforcement of the house, the mural paintings were completely restored and underwent a process to stabilize their fixation to the walls and a new exhibition project, entirely new, was implemented, highlighting the relation between Portinari and the town where he was born.  The process has also revealed a previously unseen fresco, near the house entrance house: a dark hair woman, holding a blue-eyes baby. In December, 2014, a comittee of reseacrhers attested that the work was really done by Candido Portinari, with the help of an unkown assistant.

The museum is managed by ACAM Portinari (Cultural Association for the Support of Casa de Portinari Museum), a Social Culture Organization, through an agreement with the State Government. Besides the museum in Brodowski, ACAM also manages three other museological units in the São Paulo countryside in a partnership with the State Secretariat of Culture: the Índia Vanuíre Historical and Pedagogical Museum in Tupã, Felícia Leirner Sculpture Museum and Cláudio Santoro Auditorium, both in Campos do Jordão, and supports the actions of SISEM-SP (State Museum System) as well.

Son from a humble immigrant Italian family, Candido Portinari was born in 1903, in a coffee farm in Brodowski, where his father worked on the harvest. When he was just 15, he moved to Rio de Janeiro to go deeper into his learning in painting. He received several national and international awards, and exhibited his art on the main galleries of art of his time.

Over his career, Portinari made at least 5,000 works of art, among frescos, oil paintings and drawings. Some of the most famous ones are “Café” (Coffee), exhibited at the Museu Nacional de Belas Artes (Rio de Janeiro), “O Lavrador de Café” (The Coffee Peasant) and “Os Retirantes” (Migrants), both from the Museu de Arte de São Paulo (MASP), and the panels “Guerra” (War) and “Paz” (Peace), donated to the UNO (United Nations Organization), in New York (USA).

Candido Portinari died in 1962, victim of intoxication from the paints he used.