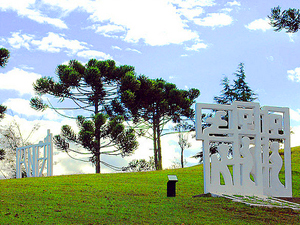 Felícia Leirner Museum and Claudio Santoro Auditorium, institutions from the Secretariat of Culture from the State of São Paulo, are located on a 35-thousand-square-metres area, in Campos do Jordão (SP). Currently, the institutions work by highlighting three elements: Visual Arts, Music and Environmental Heritage.

The Museum, inaugurated in 1978 and officialised in 2010 in an exuberant-landscape area, with a mild climate and fresh air, gathers 85 sculptures by the artist, of bronze, white cement and granite. The artworks show the artist’s passion for the nature and portray the set of her work that can be divided into five phases: Figurative (1950 to 1958), Heading Towards the Abstraction (1958 to 1961), Abstract (1963 to 1965), Organic (1966 to 1970) and Landscape Cutouts (1980 to 1982). In 1987, the collection was considered one of the most important on this genre in the world, by the Sculpture Magazine, from the International Sculpture Center, from Washington D.C. (USA).

The Auditorium, inaugurated in 1979, is able to have an audience of 814 people and has accessibility equipment such as ramps, lifts for disabled people and adapted toilets. The stage has an orchestra pit, and in the offstage area, big dressing rooms, rehearsal rooms and a technical area. In the entrance hall, there is a lounge bar and a café. This is also the house of the greatest and most important event of classical music in Latin America, the Winter International Festival of Campos do Jordão.

The area, where Felicia Leirner Museum and Claudio Santoro Auditorium are located, is an important Atlântica Forest remnant. A study done in 2011 concluded that the place presents a rich biological diversity, which includes species of animals threatened with extinction. By having this survey as a base, the institutions can now target their environmental actions, strengthening themselves as partners of conservation unities and as references for the environmental communication about the region, integrating themselves to the mosaic of protected forests, protection of biodiversity management and recovery of degraded areas.

Both institutions offer an exclusive space for welcoming and receiving visitors as well as a free car park, also able to receive disabled people. Among the projects for the community, there are the “Chorinho at the Museum Series”, the “Appointment with the Art”, the “Claudio Santoro Series” and the “Orchestra at the Museum Series”, among others.

Born in 1904, in Warsaw (Poland), Felícia Leirner disembarked in Brazil, country that she adopted as her home, in 1927. Among the awards she achieved as sculptor are the Acquisition of the Museum of Modern Art in Rio de Janeiro, in 1955, and the Best Brazilian Sculptor award, during the Biennial of São Paulo, in 1963.

Some of her artworks were incorporated to the collections of the São Paulo Museum of Art (Masp) and the Modern Art Museum of Paris (Georges Pompidou Centre), in France. Other international collections also received her works, such as Hermitage, in Russia, Royale de Belgique, in Belgium, Ein-Hod, in Israel, and the Modern Gallery of Belgrado, in Serbia.