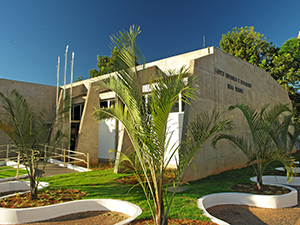 Founded in 1966, Índia Vanuíre Historical and Pedagogical Museum, institution from the Secretariat of Culture from the State of São Paulo, in Tupã (SP), gathers one of the most important ethnographic collections of the country. With about 38 thousand pieces, which represent different Brazilian Indian communities, from the Kayapó to the Yanomámi – including the Kaingang and the Krenak, people who still inhabit the west region of the State, in the collection there are hunting, working and domestic objects as well as other ones for everyday life activities on the Indian lands, besides feathers, ceramic and objects used in religious rituals.

With a modern architectural design, made of concrete, the building was built in 1980 and, after being renovated, it reopened in 2010 with a revitalized and long-term exhibition and changes inside and outside the building. Besides the exhibitions and the storage areas, the museum has also achieved an auditorium for 60 people.

At the new museum exhibition, it is possible to check concepts such as the interculturality, the diversity and the difference. The first exhibition module shows the history of the city in a dialogue with the contemporaneous, the historic and the constitution of the city. The second and third modules show the Vanuíre Indian lands and the Kaingang and Krenak ethnic groups, with their culture and resistance. The museum still gathers pieces of information and objects from other 47 ethnic Indian groups from Brazil. There is also a space dedicated to the “feather art” and the exhibition of fabric and basketworks, with multimedia resources texts.

Since 2008, the museum has been managed by ACAM Portinari (Cultural Association for the Support of Casa de Portinari Museum), a Social Culture Organization,through an agreement with the State Government. Besides the museum in Tupã, ACAM manages two other museological units in the São Paulo countryside in a partnership with the Secretariat of Culture from the State of São Paulo: Casa de Portinari Museum (Brodowski) and Felícia Leirner Museum/Cláudio Santoro Auditorium (Campos do Jordão), and still supports the actions of SISEM-SP (State Museum System).

Vanuíre is considered as the great pacifier of the conflicts between the white man and the Kaingang, in the west of São Paulo. She, according to researchers’ report, would have come from Paraná, but for lack of historical documentation, it is not possible to state where and when she was born. Vanuíre died in 1918, at the Icatu Kaingang Village, in Braúna city, region of Araçatuba.

According to reports, as she was tired of seeing her people being decimated, Vanuíre climbed a ten-metre-tall Cariniana (jequitibá) trunk, where she would stay from daybreak to sunset, singing peace songs. On the 19th March, 1912, she experienced the result of her efforts in aid of the pacification. In that occasion, ten Kaingang warriors went to the white men camp, as a sign of peace, and they were received as brothers.